Santa Claus cover from Finland no. 3 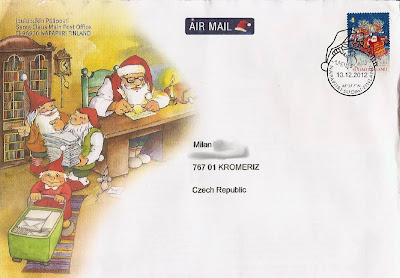 And Santa Claus remembered us again, as can be seen on this gorgeous cover sent from Santa's Office in Napapiiri:) Via Giovanni. Grazie mille!!!
Posted by Milan at 19:27 2 comments:

Cover from Aland no. 6 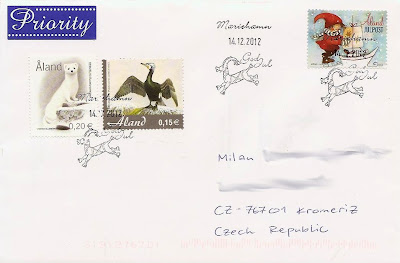 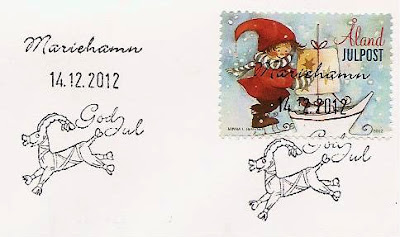 A lovely Christmas greeting from Mariehamn in the Aland Archipelago, with a special postmark from 14/15/2012. Thank you, Liisa! 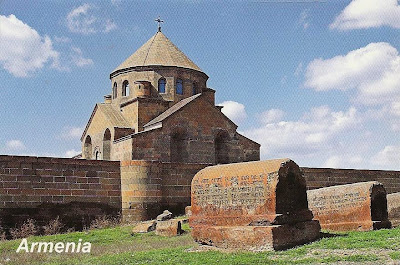 A lovely postcard received today from Yerevan, Armenia, showing the Church of Hripsime (completed in 618) in the city of Vagharshapat, (Echmiatsin), which is part of the UNESCO World Heritage Site of Cathedral and Churches of Echmiatsin and the Archaeological Site of Zvartnots. 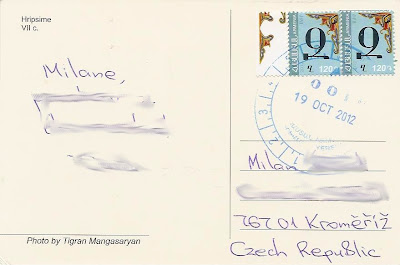 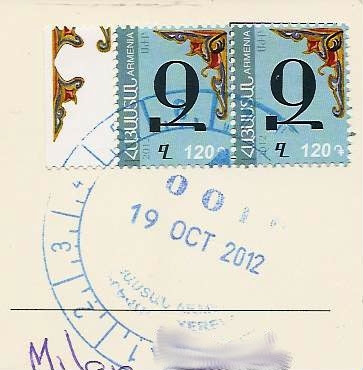 The card was sent only 5 days ago and bears two definitive stamps of 120 AMD from 2012, showing a letter from the Armenian alphabet. 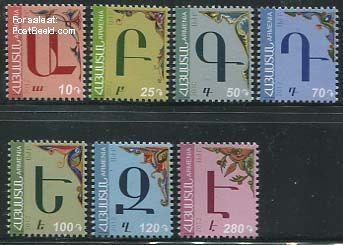 Cover from Thailand no. 4 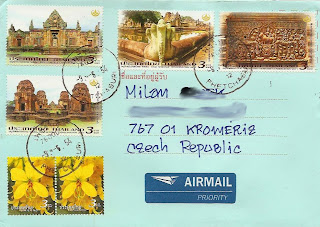 A nice cover sent from Phetchaburi in Thailand with the complete set of 4 stamps issued in 2011 as part of the Thai Heritage Conservation project. They show various sights at the Muang Tam Religious Sanctuary in Buriram province. Print run of each stamp: 500,000. The cassia definitive is from 2010. Thank you, Terdsak!
Posted by Milan at 13:40 3 comments: 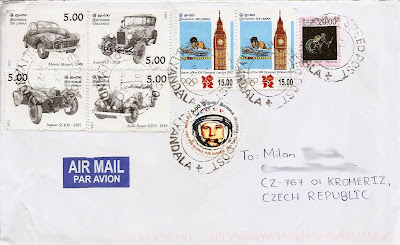 A fantastic cover received recently from Piliyandala (susburb of Colombo) by Gayanth. 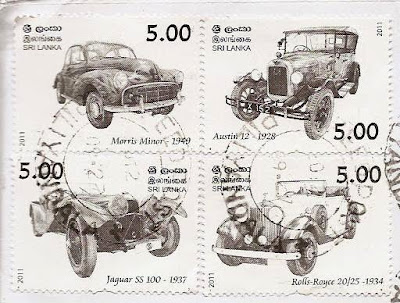 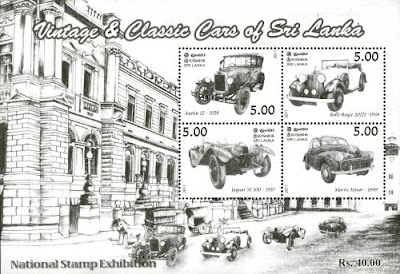 The London Olympics stamps from this year were issued in a similar form, here's the 15 rupee value, 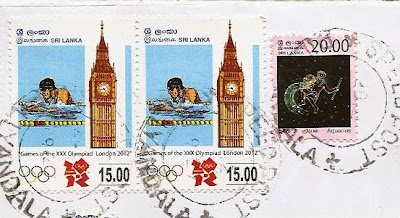 and the whole set: 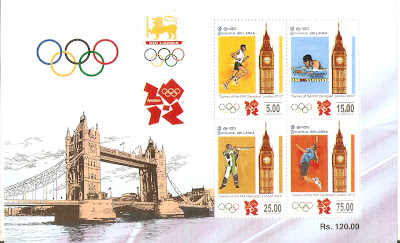 The 20 rupee Aquarius stamp is part of a series of twelve zodiac signs from 2007: 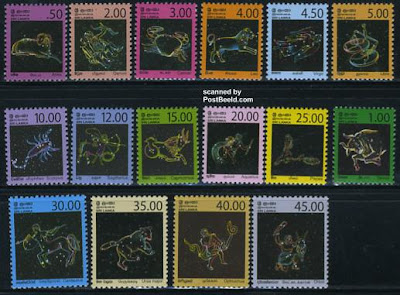 and Yuri Gagarin, the first man in space, was celebrated in 2011 as well (here in connection with Sri Lanka): 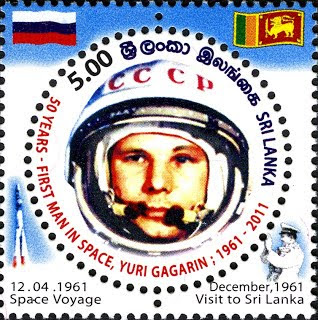 Thanks a lot, Gayanth! Also for the used stamps and the postcards!
Posted by Milan at 09:47 2 comments:

Cover from Sweden no. 2 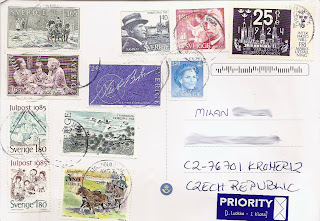 A fantastic cover received a few days ago from Stockholm, Sweden, with 11(!) engraved stamp, works by such authors as Cz. Slania (the two top left stamps from 1982 (Living Together), or M. Morck (Niels Bohr, 1982). The topics range from Nobel Price winners (Hamsun, Kroch, Bohr, Kawabata), to Christmas (1985) and horse sports (1990, engraved by I. Sjooblom), with a stamp commemorating the 8th World's Postal Congress, from 1974. Thank you very much, Minna!
Posted by Milan at 21:54 No comments: 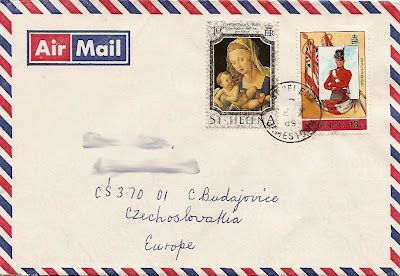 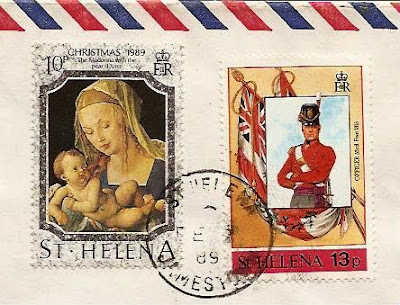 A beauty, unfortunately not sent to me, but to somebody in Budweis (Ceske Budejovice) in 1989, from the tiny island of St Helena (of the Napoleon fame). Both the 10p "Madonna with the Pear" Christmas stamp and the 13p stamp from the series Flags and Uniforms, were issued in 1989. The envelope bears the postmark Jamestown/St. Helena.

Cover from the USA no. 9 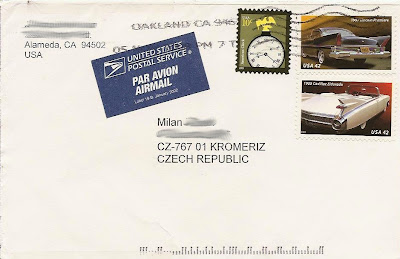 Recently, I've talked a bit about classic cars so here's another nice cover with them...this time from the US, with two of the five stamps commemorating the classic cars of the 1950s as part of the Americans on the Move series. Depicted here are 1957 Lincoln Premiere and 1959 Cadillac Eldorado. The letter was sent from Oakland, CA. 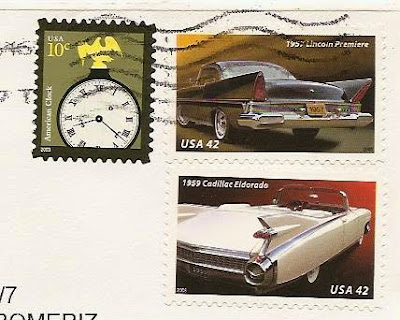 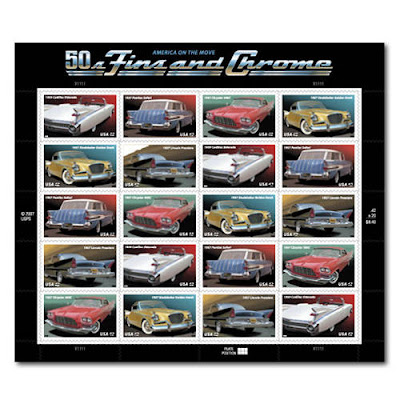 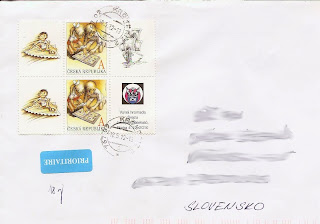 A letter sent from me to Slovakia (where I took it for myself), with two "A" stamps taken from a sheet of 9 stamps and 12 tabs issued in 2010 to promote philately. Hand-cancelled in Kromeriz, 767 02 (Post Office in the Main Square, fortunately not using machine cancellations yet). 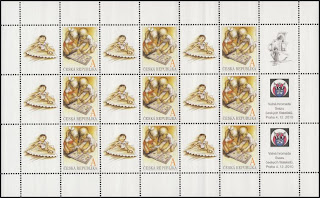 Cover from Belarus no. 5 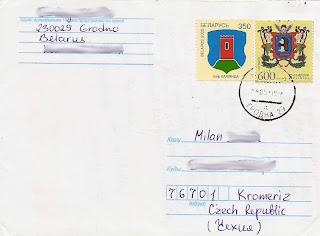 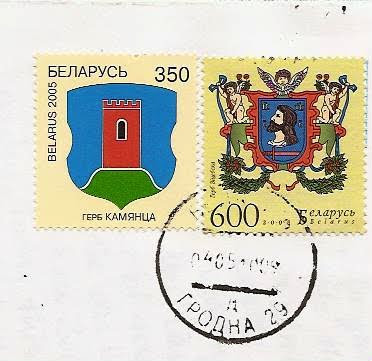 A nice two-stamp cover with the coats of arms of the towns of Kamyanyets (issued in 2005 in a series of 3) and Vitebsk (issued in 2008 also in a series of 3) sent from Hrodna in 2010. The total facial value of the stamps is 950 Belarus ruble, which is 0.085 euro or 2 Czech crowns = ten times cheaper than sending a letter the other way round...

Thank you very much, Helena!
Posted by Milan at 09:59 No comments: 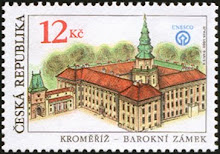 Milan
Kromeriz, Zlin Region, Czechia
38 years old, fond of nice covers (not necessarily FDCs or illustrated - unfortunately, I am not able to send them from where I live), stamps: EUROPA, geographic topics (tourism, regions, towns/cities, world heritage, maps, flags, coats of arms), books and authors, fairy-tales, legends, gastronomy, astronomy, trains... and written/stamped postcards from around the world. My email is in my profile. The address on the scanned covers here is incomplete. I am open for trades. My postcard collection and postcards for trade: http://picasaweb.google.com/littlebig74